Atelier Firis The Alchemy and the Mysterious Journey PS4 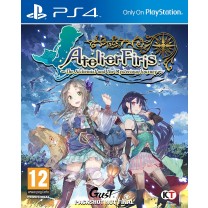 Atelier Firis The Alchemy and the Mysterious Journey PS4

The 18th entry to GUST39;s popular Atelier franchise takes place after the events of 201639;s Atelier Sophie: The Alchemist of the Mysterious Book expanding on the series39; delightful narrative. The second entry in the 39;Mysterious39; saga follows the adventures of the enthusiastic Firis Mistlud and her loving older sister Liane Mistlud. The Mistlud sisters have lived their entire lives in the isolated town of Ertona where Firis uses her unique ability to see where crystals of materials are buried. By way of a fateful encounter Firis learns of the Alchemy Exam and decides to take her first step into the outside world setting off on a grand journey to become a certified alchemist and discover the mysteries that life has to offer Players will experience a vast world with towns environments and other locations reaching up to ten times the size of those featured in Atelier Sophie: The Alchemist of the Mysterious Book. Atelier Firis: The Alchemist and the Mysterious Journey takes the longrunning franchise to greater heights with a brandnew option to choose which narrative path to follow. After passing the exam players are able to follow three different paths that focus on the three key aspects of the Atelier series Alchemy Combat and Character relationships. Choice plays a major role in the events that can be experienced throughout the game with the ability to switch between the three paths at any point during this grand adventure. A vast world awaits in Atelier Firis: The Alchemist and the Mysterious Journey with views ranging from busy harbors to murmuring rivers to imposing mountains and more. Along Firis39;s heartwarming adventure she will visit a wide variety of picturesque towns and villages such as Reisenberg the prosperous city where travelers gather Mechen a tranquil village with fields as far as the eye can see and Flocke the village of dancing snow. Between settlements there are a plethora of different environments to discover each with their own particular weather conditions that affect travel. Selecting the appropriate attire for each situation will grant Firis benefits and allow her to easily traverse these terrains. The Snow Bright costume reduces the consumption of Life Points in icy cold conditions while the Zealous Explorer gear aids travel through blistering heat. Outfits can have countless other effects such as accelerating movement speed enhancing synthesis abilities or increasing the likelihood of finding high quality materials While exploring their surroundings players will encounter events which they must overcome to access new locations. These challenges will have multiple solutions that can permanently alter the environment. Take a broken bridge for example fixing the bridge will allow for easy access to the other side but taking an alternate route could lead to the discovery of useful synthesis materials. Some of these Landmarks will be quite useful for Firis39;s travels and sh